Violence Is a Transaction 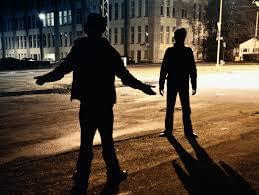 When it comes to feeling vulnerable in the face of conflict and violence that we have to deal w/today, it's easy to LOSE our FOCUS!

That's right, we begin focusing on the WRONG THINGS!

Rather than focusing on things that will solve the problems, we focus too much on the problem, what we can't do and BLAME!

We can easily begin to look more closely on what we can't do and not enough on the things we CAN! And putting the blame on everything and anything but ourselves!

This builds frustration, which often leads to power struggles.

Because in a world of almost limitless possibilities, sometimes it feel like the impossible is possible, even when it's not!

When this happens it is easier to begin to transfer responsibility and begin blaming other people or circumstances as to WHY this 'Perfect Solution' isn't happening.

When it comes to conflict there isn't always a 'Perfect' outcome...

Sucks or sucks worse, as I like to say!

See adversity rather than adversary!

If you can work toward compromise and putting your heads together to come up with a solution, it can be easier to shift the focus on solving the problem.

...Even if it is a potentially violent encounter!

"What you talking about Willis?!"

How does this work in a potentially violent encounter?

Someone is robbing you...

You could immediately go into 'physical resolution mode' and try Krav Maga-ing your way out of it (and under some select circumstances that IS an appropriate response... but not many!).

Or... In the 'Sucks or Sucks worse' world of violence, you could inquire what the assailant wants and try to resolve the situation as quickly and non-violently as possible.

SUCKS WORSE: Getting killed over your replaceable 'stuff'!!

If someone gets close enough to threaten you w/a potentially lethal weapon, chances are they could have already killed you (or put in some serious effort toward it), so if you're not dead yet, they must WANT SOMETHING from you!

And if this is the case, then they have something to gain or lose by your interaction...

And as the creator of Verbal Judo, Doc Thompson said...

Now is not the time to be thinking what "should" be happening or how they "shouldn't" be doing this or how this isn't "fair!"

You should be thinking about how you can get out of this as quickly as possible w/as little risk exposure.

The longer this 'Transaction' continues the more of a chance the cost will be higher!

...In some cases MUCH HIGHER!

NO, all situations cannot be negotiated out of... but MANY CAN BE!

How Do to Know the Difference

In our world of googling life's answers, it may fill you with anxiety to hear this...

Pay attention and listen to your gut...

If you want a little more insight on this read:

The Gift of Fear by Gavin DeBecker
Blink by Malcolm Gladwell

And/or take one of my courses like the Fearless in 5 Day Challenge!

But, don't try to negotiate when it isn't appropriate or 'spring into violent action' when you could've talked your way out of it.

Most conflicts you are likely to run into are ones that involve verbal communication and although have a chance to escalate to a physical assault it is avoidable.

Others are 'violence on contact' type situations... but those are much more rare (thank goodness!).

Have tools to deal with BOTH!

Know how to discern one from the other!

#1 - Some one approaches you, pulls out a gun and threatens you to give them money.

Trying to physically take the gun away probably isn't the best option for surviving this circumstance here...

Rather, under most circumstances, calmly and quickly give them what they want, conclude the 'transaction' and get the heck out of there!

#2 - Same situation as above, but after you give them your money they demand you get in the car or try to take you somewhere...

The transaction just CHANGED! It is no longer only about money. You need to rethink your strategy here...

(A bit more of a sophisticated response... one that requires a email/blog itself... we also discuss this situation at length in some of our training's.)

#3 - You hear gunshots, than see someone walking toward you after just shooting multiple people (Active Shooting Event).

Most likely for your own survival, IMMEDIATE PHYSICAL ACTION is required... (Run, Hide, Fight).

**Here's a quick Krav training video: How to physicallydefend yourself from a knife threat to the side of the throat.