The Art of Shaking Off the Dirt 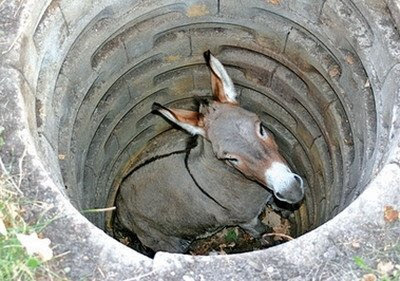 Never Quit!
One day a farmer needed to fill in his dried up well. When he came up to the hole, he saw that his old donkey fell into it. It was just laying there crying.
Trying to figure out what to do, the farmer finally decided that the donkey was too old and feeble and it wasn't worth the effort to get it out of the well. The well needed to be filled up anyway, so he could kill two birds with one stone so to speak. Fill in the well and bury the donkey.
The farmer asked all his neighbors to help him. So, they all grabbed a shovel and began shoveling dirt into the well.
At first the donkey thought they were going to help him. However, as the shovel loads of dirt began falling down on him, he quickly realized what they were doing and began to cry.
A little while later, the crying stopped, but to the farmer amazement, when he looked in the well he was astonished. When each shovel load of dirt that fell on the donkey, it shook it off and step up on it. Finally, after countless loads of dirt falling on the donkey, the pile had built up high enough for the donkey to step up over the edge of the well and trot off free from the confines of the well and ill will of the farmer and his neighbors.
The Moral of the Story
Life is going to throw a bunch of dirt on you. The trick is to keep shaking off the dirt and stepping up on it! With the right perspective, each of our troubles is a stepping stone to your success.
You can get out of the deepest, darkest well by keeping the right perspective and never giving up, even when everyone's throwing a bunch of dirt you!
Oh, later, that donkey came back and bit the farmer. The farmer eventually died in agony from septic shock due to the bite getting infected.
Another Moral...
When you do something wrong, and try to cover your ass, it always comes back to bite you!
Speaking of...
You'll find more tips, tricks and tactics here on my weekly Podcast.
Go check it out!
https://anchor.fm/craig-gray1
Have a great start to your week and I'll talk to you again soon!