A Little Bit of Me Died Too... 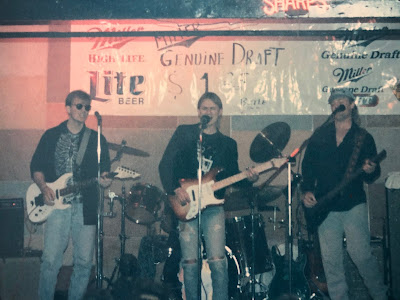 My rock'n roll days. Probably taken in 90' or 92'
I'm on your left w/the sunglasses. Mike is center stage singing

I just got back from a funeral of an old friend of mine Mike. We're pictured above from a gig we were playing at back in 90' or 92'...

Yes, yes, I had hair at one point! =)
I've played in bands since before I was even a teenager. Drums first, then guitar.
In 1988 a couple of guys that I trained martial arts with, Jim & Steve Seppela had a band called Borrowed Time. One of their guitarists left and they had an opening.
When Jim found out that I had been playing guitar in a few bands, he asked if I wanted to try out? I agreed to meet him at his house the following week.
I can still remember how nervous I was when I showed up at his house. I knew Steve, Jim's brother, who was on the drums... but I didn't know the other guy. Mike was a few years older than I and looked a lot like Tom Petty.
Boy could he play! AND sing too!
I was a little intimidated at first, but that all melted away once we started in, playing on the first song. I continued playing my little heart out with the guys for a couple more hours. We all seemed to have a great time.
After we tore it up for a bit, I was told to step outside.
Oh, I get it, they're going to vote to see if I'm going to be in the band. I didn't really even think of that. Once I did, I got a little nervous and started pacing outside of Jim's garage for what seemed like hours before I was called back in.
I was trying to read their faces. All of them were playing their cards close to their chest.
Jim came up to me and with a serious look on his face.
"Well..." His pause intentionally long.
"....You IN!" He exclaimed, quickly changing from serious to jovial. Bursting out in a big smile and slapping me on the back.
I was so excited!
We practiced together one time per week. They already had a pretty steady stream of gigs, mostly weddings, bars and in October, a few Poliski Days shows.
If I had a dollar for every West Side hall that I played I'd be... Hey, I DO have a dollar for every Hall I played! =)
Because the band had paying gigs, I had to ramp up pretty quick, so I practiced a lot at home to prepare.
As much fun as I had at that first practice, the second, third and forth practices felt brutal.
Mike frequently would get upset and frustrated. The two of us didn't exactly hit it off at the beginning...
Actually we bumped heads pretty hard at first. Mike was a sarcastic guy with a very sharp tongue. He was a bit temperamental and seemed to have a short temper.
After only a few sessions, I was ready to both kill himh and quit the band.
He was being such a dick!
After one particularly challenging practice, he approached me and asked if I wanted to come over to his place to practice some of the songs together.
I reluctantly agreed. Thinking this was the last shot to give this a go.
I was once again nervous that Mike would be critical and act as he did at practice...
But, it didn't happen that way at all. Mike was really nice to me. It was like the first time I had got together with him, Jim and Steve.
We got a lot done and had a great time. We started getting together a few times a week to practice. Shortly after, we started hanging out just to hang out.
We ended up having many adventures together and forged a friendship that lasted a Lifetime.
As time went on, our Lives would separate and intersect several times depending on the year or decade.
He was one of those friends that even after not seeing each other for years, we'd sit down and it was like no time had passed between us at all.
I hadn't heard from him in quite some time, so I was a bit surprised when I got a text from him last year.
He was in the hospital, really sick.
It was just before Thanksgiving 2019, I was getting ready to leave for Japan to do some training. I don't think it was a coincidence that got his phone call at that time. If it would have been any later I probably wouldn't have been able to see him.
When I got to the hospital, even though he didn't look good at all, I was glad that he called, so I could go up to visit. I got the feeling it would be the last time I would see him.
I followed up with him a few times after I got back in the country. He was doing better and out of the hospital. His diagnosis came back. He had leukemia.
Due to his condition, he decided to live with his parents again. The chemo treatments were hard on him, often leaving him very weak.
We spoke a few times this past year, with the intention to get together, but time slipped past and then covid hit..
I spoke with him maybe three weeks before his passing. I'm glad to have connected with him before he died.
Walking the Path...
Mike Lived a big Life... a full Life... Probably several!
I'm glad to have shared some of it with him. It was my privilege.
A little bit of me died with Mike. Not in a bad way... In a way that just happens when you have relationships like that. Deep fundamental ways that only happen early on, when you were forging who you are to become.
What Does Any of This Have to Do w/Being a Protector?
Everything...
...Thanks for everything Mike!
Keep going,
~Craig
Get my free home study course on self protection and building a  Life of a PeaceWalker -  https://sixdaydefense.com/