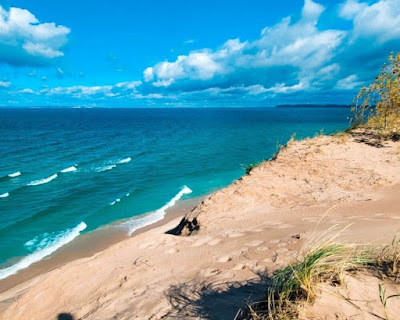 It was a warm, sunny day. I took off early from working. It had been a long week and I needed some time to myself.

I went out to Hoffmaster Park, just North of Grand Haven, in West Michigan. A place I have been going to since I was young. My folks always had a boat and docked it in Spring Lake, so, we pretty much lived out there in the summer time.
I'm no stranger to water.
Luckily, because I'm self employed, I can get out to the beach during times when no one is around... Just the way I like it!
As I  park my car, I see that there weren't too many other vehicles in the lot. Perfect, I thought!
I walk out to a spot, lay out my towel and go hit the waves.
The water was refreshing. A little cool, but my body adjusted quickly. It felt good in the August heat.
I swam out maybe fifty yards or so from shore and quickly lost track of time.
In a short while, the wind picked up a bit. The water went from fairly smooth to having a bit of a chop.
I was starting to get a bit tired and decided it was a good time to go in. However, when I started to swim for shore, I noticed that I was now way more than 50 yards away. I had drifted out much further than I realized.
I began swimming in toward the beach. No matter how hard I swam, I wasn't getting any closer. I actually seemed to be getting further away. I was getting pulled out into the lake!
It suddenly dawned on me that I was caught in a rip current.

Not my first time, but... Sh*t all the same!
I was a bit tired, but not exhausted. However, it would be easy to extinguish any energy I had left, by continuing to fight the current.
I stopped and just treaded water for a second. I took a breath, tried to relax and get my head on straight.
There were no lifeguards and people were sparse. Not to mention I don't think anyone would have come out to get my happy a$$ anyway. Heck, I doubt anyone would have even noticed or heard me if I were to yell for help. I imagined the Coast Guard or sheriff picking my body out of the giggly weeds.
I knew what to do, but was still a bit shaken. That sliver of doubt can lead to panic if you let it.
If you are caught in a rip current, here are the steps of dealing with it:
1. Remain calm.
2. Don't fight the current.
3. Swim parallel to shore until you are out of the current, then once outside of the 'rip', you can make your way toward shore.
I swam along the shore for what seemed like forever, but in reality it was probably a hundred yards or so. It felt like I was out of the current, at least I hoped so.
Thankfully, when I turned toward shore, I indeed began making some headway. This seemed to renew my energy.
I was glad to get to the point where my feet could touch the bottom and I walked the rest of the way to shore.
I ended up on a private beach some distance from where my towel was.
My breath was still labored, as I made my way back to my place in the sand. I was probably about a quarter of a mile or so from where I started!
I called it a day after that. Grabbing my stuff, I ended up at this little taco joint near Muskegon. The best tacos I think I've ever had! =)
Not Just a Swimming Lesson
You may be wondering what does this have to do with anything?
It's a reflection of what's going on right now.
There is a strong current going on right now, a huge shift that's occurring in our world. If you don't know how to navigate it, you will drown.
Like that rip current I was caught in; If I would have fought the current and swam directly toward what I wanted (shore), I would have became exhausted and drowned. The current was too strong.
Just like today, you may feel as if you are caught in a strong current and want to fight it directly to get where you want.
Yes, you may have to fight, but you have to be smart about it and understand the nature of these things. And the nature of your own limitations. What you can and cannot control.
Concurrently, if I would have gave in to the current and swam with it, I would have been swept further and further away from shore out to sea. That too would have been disastrous. I would have been pulled so far out into the lake, I would most likely have exhausted myself and probably drowned, if no one would have found me.
I had to fight to do the counter-intuitive thing...
Stay calm. Clear my head. Understand what I was caught up in. Determine what was in my control and what was not.
I had to strongly swim parallel with land, and get past the rip current. Then and only then, could I swim toward the shore. Once there, I could cut back to where I wanted to be.
Not the most direct route...
Now don't get me wrong. I still had to fight, but I had to have enough wisdom in nature and myself, to fight smart not just hard. Had I only fought hard, I would have certainly perished.
This too is relevant today. You may be called to fight... Or the fight may just be inside of yourself. The truth is it's probably a bit of both.
Today & Tomorrow
It feels to me that the winds of change are blowing. They are driving a strong current that you and I have some control over, but not as much as we probably would like to have.
You may like where this current is taking us. You may not. Regardless, it feels as if big things in our world are changing. Strong currents on many levels. Either way we'll have to adapt.
It's too early to see where this current is leading. There is a lot up in the air at this point and it will take time to redirect and settle.
You'll have to not only learn to swim, you'll have to be swimming in a very particular way to not become exhausted and drown.
It's not intuitive, it takes some clarity and basic knowledge of the nature of things and of yourself.
You may fight or go with the current. You may choose to go parallel with the shore, until you find your opportunity. Regardless, you'll have to be strong, clear and have a good head on your shoulders in order to not exhaust yourself and go under.
Remember, with change comes conflict.
You'll want to have more skills when it comes to protecting yourself and dealing with the wide array of conflicts that are coming your way in times like this.
So, if you are looking to develop those skills and greater insight on what conflicts like these bring, then look no further than my Private PeaceWalker Membership.
I'll be opening it up to new members soon. Don't miss your chance to develop the skillset that will help you when your in deep water.
Get on the waiting list now:
https://peacewalker.net/about
Alright, enough of the deep talk. Time for some everyday reality!
Have a great day! I'll catch up with you later.
Keep going,
~Craig