LaRusso & Lawrence in the Aisle 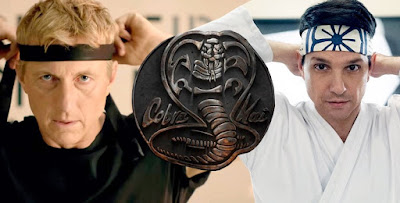 Where did the weekend go?
Last week I got some great correspondence back from you guys!
There's an email I received from Jim D., one of our PeaceWalker Community members, that I wanted to share with you. I think you will find it not just interesting, but beneficial too!
Danny LaRusso
or
Johnny Lawrence?! =)
Craig,
Just a quick note; I laughed this morning when I read your email recounting Jenn Franson's recent checkout aisle experience. Not a derisive laugh by any means, but one of honest amusement.
Anyway, my source of amusement was imagining in my mind's eye, as I was reading her account, of the very real possibility of one or more burly, macho guys in proximity watching tongue-tied with mouths agape as this little wisp of a gal took charge of a nasty encounter with the potential of getting even nastier!
(Okay, maybe they wouldn't have been "burly" in the traditional sense, but next to Jenn, even a 5'-10" 150 pound pencil-neck could pass as such!)
From my perspective, as a guy close to and very quickly closing in on his 7th decade on this rock, I harbor no illusions of being much of a viable backup to Walker Texas Ranger or going toe to toe with a guy two or more decades my junior. That's one reason I resigned a while back from my night and weekend gigs as a Reserve Deputy with Ottawa County, as well as in church security - some things are just better left to younger guys and gals!
That's why I appreciate your well-rounded approach to all of the elements that go into what we refer to as the "Peace Walker lifestyle". That's not to say even a guy of my [advancing] age doesn't appreciate having one or two "surprises" up his sleeve for a miscreant who might judge me a too-easy target. But those things are nowhere close to being at the top of the list of tools one would employ in an encounter such as what Jenn described, but rather a last-ditch back-up if all else fails. (And to be honest, for me, more than likely as a last-ditch tactic to give me the time to get the hell outa Dodge!)
Thanks again for everything you offer to our community, one example of which is to empower people like Jenn (and hopefully people like me given similar circumstances) to not only be a positive influence in the incident she found herself in recently, but just as importantly to have the confidence to step up and de-escalate, and the discernment to know it was appropriate, where others failed to do so.
As an aside, I'm enjoying the series "Cobra Kai" on NetFlix right now. Thanks for being our version of Danny LaRusso rather than John Kreese or even Johnny Lawrence (who seems to be coming around, albeit in fits and starts)!
Take care and Stay steady,
~Jim D.
Great Stuff...
I always love hearing from you folks! As our community continues to grow, more and more folks are taking the time to reach out...
And...
I really appreciate it.
Unlike many organizations, I try to respond to everyone who contacts me.
I find that when people take the time to email me, it is much more thoughtful of a correspondence... That's just ONE of the reasons why although we are on some of the social media platforms (flakebook, Instagram, Youtube, Twitter & LinkedIn), I really don't interact that much on them. To be frank, I'm not a big fan... (Big surprise right!?) I really try to manage how I use them. Sparingly & precisely.
This is more my medium... emails. That and our Private Membership. That's where I dedicate most of my time serving you here on-line (well, most of my time is dedicated to teaching live in-person trainings.)
Time, attention & energy is limited and I want to have enough for you, in this community. The more you commit to your training here, the more I can and will commit to helping you.
I can't do it for you, but I can help you get there... But you have to want to learn and invest in yourself.
I can't help you do that if I'm spewing all of my time, energy and emotion on social media that attracts energy vampires and people who just don't get it.
They're looking for something else... Entertainment, distraction, drama... Whatever, that's their choice. More power to 'em. You and I have other plans... Bigger plans!
Which reminds me, if you want in to my Private PeaceWalker Membership, it'll be opening up again in the next few weeks.
What's In It!?
Here are some of the things available in the PeaceWalker Private Membership:
~ The PeaceWalker Total Defense System: Cornerstone to the entire approach!
~ Complete Courses On:
- Krav Maga & Defensive Tactics
- Assault Prevention & Response
- Pistol & Rifle Disarms
- Knife Defense
- Passenger & Mass Transit Hostage Defense
-Security, Escort & 3rd Party Defense
- More...
~ Full Training Modules:
- Church Security
- Concealed Carry & Firearms Training
- Classroom Management - Violence Prevention & Response
- Active Assailant Prevention & Response
- More...
~ LIVE Monthly Coaching Calls
~ Monthly Krav Seminar Videos
~ Weekly Content Updates
~ Exclusive 'Members Only' Content & Discounts!
~ Bonuses & Some Surprises!
All for a little more than $1/per day!
Sorry, you can't get in quite yet, but now's the time to consider if you want to give it a try. You can cancel any time, but why would you want to if it's working for you!?
Follow this link to get on the wait list:
https://peacewalker.net/about
Have a great day. I'll catch up with you later.
Keep going,
~Craig