Clean Up in Aisle 3 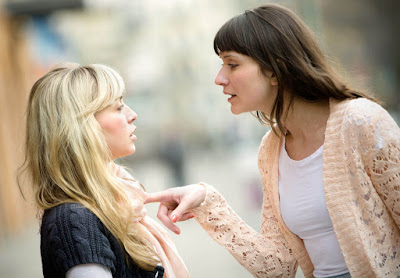 I received an email from one of our long time PeaceWalker members, Jennifer Franson. She had an incident happen recently while at a clothing store. She tells how her training helped her deal with the conflict that ensued.

Here's Jenn's Story:
What Did You Just Say To Me?!
There is a lot going on right now and it is confusing and we need people with clarity and confidence now more than ever.
For that, I suggest TRAINING!
Let me share with you something that happened that led me to that conclusion!
This last week I was at a makeup store with my daughter and we were returning a gift.
We were waiting patiently for the cashiers computer to get unstuck when...
Suddenly a woman enters the store storming to the cashier, Let's call her Lucy. So Lucy comes in and asking her where the d boldly asks for the manager, "You know the manager who deals with secret shoppers etc..." The cashier girl tried to help her but none of it was to her liking and so she stormed off into the store.
Two minutes later Lucy comes around the other side of us up to the counter with a product in her hand waving at the cashier. The cashier asked her if she wanted to buy it and then directed her to the end of the line. With that, Lucy turned around declaring, "you don't know who I am You're going to pay for that"!
Needless to say she had everyone's attention and things were tense!
But it didn't end there!
When she came to the end of the line the woman there clarified that yes she had found the right spot. Lucy walked up to that woman and coldly stated,
"do you know why you're at the end of the line, because you're fat"!
The victim of her verbal response replied fiercely.
"You think I don't know I'm fat?"!
Redirecting the attack with ultimate control in her voice Lucy then declared,
"And You're a fake. You're trying to be dark like me but I'm the real thing. You're a fake and bake!"
the woman response revealed her vulnerability as she again tried some defensive verbal moves.
I could see that she was getting sucked into the crazy.
It ended with someone yelling to call the cops and Lucy defiantly dropped her product and stormed out the door stating, "you will regret it"!
NOW HERE'S THE CATCH
HOW WOULD YOU HAVE RESPONDED?
I can tell you there was a variety of responses, ...freezing wide eyed, afraid wanting to get away, filming with phone, yelling for cops...
So as it continued that gave us time to choose a response and feel the shock.
(Now if the incident had been physical we would not have had that luxury.)
I told you some of the responses I saw from other bystanders, so now let me share with you mine.
FIRST - I kept a clear head and was not rattled!
See, I didn't have to process the fear or freezing response because I felt confident before the incident started. I watched from where I was first determining if anyone was in physical danger,
With the fear and freezing of the other audience members I was contemplating if my intervention would help or not. I clearly judge the situation and encouraged the bystanders not to freak out. I then attempted to direct the attention of the woman who was The victim of Lucy's verbal attack.
I encouraged her to turn around and not listen to Lucy which at the same time was when people were yelling call the cops and Lucy exited.
My point here is, I was able to stay calm and act when everyone else couldn't.
I have to be honest....that felt really good to be so confident and powerful in the situation.
And that brings us back to my first statement about gaining clarity and confidence through TRAINING!
I have been training in Krav Maga and Peacewalker Conflict Management for almost 10 years.
This incident was like a test that I passed. I didn't have to work my confidence up to meet that situation, it was already there!
So let me encourage you engage in some training that will feed your protector mindset and skill.
As we know, things are a bit out of sorts right now and we need more level headed protectors.
There's no problem in calling the police... but if people had more training there might be less calls.
~ Jennifer
P.S. If you're interested in checking out where I learned my mad skills :) Go to www.peacewalker.net
Not My Words
Wow! I couldn't have written something better myself. That was a situation that anyone of us could have found ourselves in...
Not to mention, it could have easily escalated into something violent!
Jenn's training really gave her the confidence to be part of the solution more than the problem and it helped her to overcome the 'bystander effect'.
The bystander effect is a kind of mild shock and diffusion of responsibility. Basically, it's when someone sees something that needs to be addressed (like this situation, an emergency, or some other urgent matter), but no one does anything. Everyone just stares or ignores it, not doing anything until the event is over, or the 'spell' gets broken by someone taking the lead.
Anyway, this is what our training is all about. How to live a Protector's Lifestyle. It's not just about learning how to physically defend yourself (although you'll learn that too!).
Just think what confidence can do for your career. Your relationships. Your Life!
Like Jenn learned a long time ago... Having some skills in dealing with conflict and violence, gives you confidence and that confidence follows you everywhere.
Soon!
We'll be opening up the PeaceWalker Membership again soon! You'll also get free limited access to the NEW Essential Pistol Disarm Course with your membership.
You can get on the waiting list here:
https://peacewalker.net/about
Keep going
~Craig