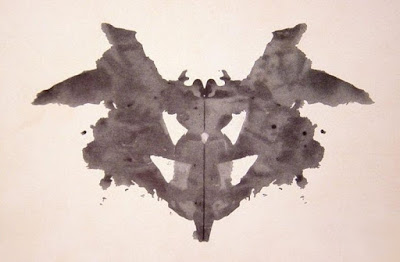 I got a lot of interesting responses from a few of those blogs I wrote in January. Many accusations of what people thought I said or meant. This was my original intent in writing that email in the first place.
In many respects that email was like The Rorschach test, more commonly known as the 'Ink Blot Test.'
What is the Ink Blot Test?
It's a test in which respondents are asked to look at ambiguous inkblot images and then describe what they see. The test is frequently portrayed as a way of revealing a person's unconscious thoughts, motives, desires or perspective.
Yesterday's email seemed to have very much the same affect on people.
And that was my entire point.
There are aspects of where we are at right now that model this test. You may see the exact same thing the person next to you sees, but get something totally different out of it.
We are all conditioned to our identity, biases and group affiliation... or tribe.
We are living in a time I call Neo-Tribalism.
It affects our perspective on things. Add a little fear and uncertainty and BOOM you have yourself the recipe for conflict and violence.
You've also heard this idea of a Moral Compass and that of Equality.
These are all great terms to throw around to feel smart on flakebook, twitter and conversations over coffee or adult beverage...
But, what the h*ll do they really mean?!
Well, I'm not going to go off on some philosophical or natural law tirade, but let me share the simple, though not easy answer.
Life is the 'True North' of both the Moral Compass and the idea of true Equality.
The idea is that Life has Value. It's a Dual Life Value and that Value is a Universal Value, extended to Self and Others, All Others. Not just the people on your 'team' or side. Not just the people who look, think and believe like you.
When that value (of Life) becomes relative, then real trouble begins. Having a double set of standards will lead to conflict and violence, often in the name of an ideology.
We cannot have double set of standards, one for you and yours, and another set for others. If this is done, the unfortunate result will be more conflict and violence to follow in its footsteps.
Like a referee, you have to be able to call the shots fairly for both sides, both 'teams' need to be held accountable and dealt with equally. If its a foul on one side, it should be the same on the other. The same goes with scoring.
We are being divided by our own biases... Our own relative values and tribalism. With seeing our side win at any cost.
It has to stop if we are to continue to reconcile and pull together with less conflict.
Can we see past our relative differences that threatens to divide; to our deeper identity that will reunite us?
I hope so...
Don't Miss Out!
Get on my Insiders List & Gain Access to the 6 Day Defense Home Study Course Register at www.sixdaydefense.com
Keep going,
~Craig