Do You Have THIS Limitation!? 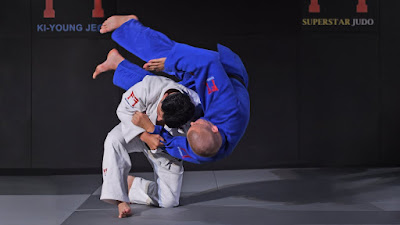 Joe, one of our Private PeaceWalker Member's forwarded me this great tie in story I wanted to share with you.

Check it out!
Limitations & Opportunities
A young man once wandered into a Judo school, because he wanted to learn how to throw people... you know... for self defense.
However, he only had one arm.
His Judo coach wouldn't let him jump into the normal classes... instead, he was forced to stay off on the side and practice a beginner throw.
Every day, the other students were allowed to master super-sweet moves and sweeps, while our One-Armed judoka did the same. boring. throw... over and over.
One day, the young man finally complained.
"I want to do advanced class with all of the other students. Don't limit me because of my disability!"!
The sensei stopped the class, and replied, "Well, NOW you're going to fight everyone in the gym. Let's see who throws who!"
What a jerk... AM I RIGHT!?
So he reluctantly stepped onto the mat with his first match, a pit of nervousness in his stomach, and began to fight.
Within seconds...
POW!
The sound of his opponent's back smacking onto the mat echoed throughout the room.
He was shocked.
However, each time the young judoka faced a new opponent, he promptly slammed with the same. stinking. basic. throw.
After 5 straight effortless victories, the young man's mind was ablaze... shocked by his own dominant ability, he looked at his sensei as if to ask, "how is this even possible"?
His sensei calmly explained, "They only know one counter to that throw... The one by grabbing the arm that you don't have". =)
LIMITATION:
It can be a gift, if you allow it to be.
Mindset...
We spend a lot of time on having the right Mindset.
One of the principles of Mindset taught in the PeaceWalker Basic Training Course has to do with your Attitude.
Can You See Conflict As An Opportunity?!
In the case of what this story is teaching is using a Limitation as a Gift!
If you are looking to learn how to protect yourself (and others) more effectively...
Build some confidence...
Live from a place of power, rather than fear...
Then you should know this...
That building these skills are more than just learning how to kick, punch and shoot.
If that was the case than any clown could learn that from watching a youtube video and/or buying a gun.
You and I both know that those things alone aren't going to get you where you need to go.
You'll need more.
You'll need to know how to build a Protector's Lifestyle.
That will take some training.
Some mentorship.
And a community of like minded folks...
Things you'll find in the Private PeaceWalker Membership.
If you want the real deal, the first step is getting your hands on my FREE Home Study Course: Six Day Defense! Get it below...
https://sixdaydefense.com
Keep going,
~Craig