This 'Cure' Is Worse Than the Disease! 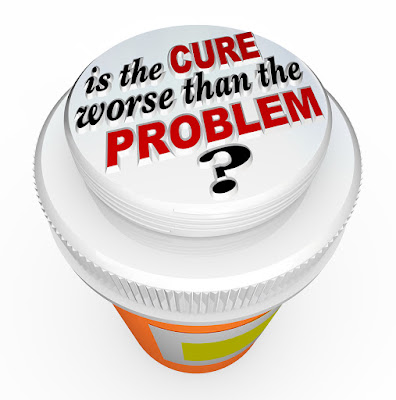 Many "Cures" are worse than the disease.
Take prescription drugs for example.
You ever watch those TV commercials where they show you how great everything is after taking a super drug, only to hear hat creepy voice pop up at the end (at 10x normal speed, so they can fit everything in), rattling off a list of side effects that include everything from depression and suicidal thoughts to coma or death!?
In our world... That of self defense, personal protection, conflict management and defensive tactics it's very much the same.
If you're not careful, the 'Cure' can end up turning you into part of the problem.
It's a subtle shift resulting from being unclear.
You come in to learn how to become a better protector and end up with an...
OUT THUG the THUG MENTALITY!
It's an easy trap to fall into!
Many unwittingly fall into this trap of thinking they have to be meaner, tougher, more ruthless than the 'bad guys'!
BUT HERE's the RUB!
You don't want to out bad guy the bad guys... It's about being a more skillful 'Good Guy.'
Yes, as my friend Jack Hoban says,
"In order to be more ethical, you have to be more skilled!"
WHY?~
Because, at some point you'll be challenged to do the right thing. And it's easier to have more courage and confidence if you have greater skills.
Skills that you can protect yourself from harm.
Knowing that you can kick some a** if you have to is a great confidence builder if you have to jump in or speak up to do the right thing rather than the easy thing.
You See...
To defend yourself, it's not about learning how to be a better thug. It's about learning how to be a better PROTECTOR!
AND that ain't just semantics! They're different ideals and different way of training, but a different perspective altogether.
If you don't have the right approach, the right mentoring, the right community, it becomes a slippery slope FAST!
And that slope will lead you to become the problem you were trying to defend yourself from.
If you're not careful, YOU become part of the problem!
Unfortunately, I see it happening all the time. Especially NOW!
People thinking that they are learning how to be the protector, but they just end up trying to 'Out Thug' the thugs.
The reality is they start becoming thugs themselves and unknowingly just add to the problem by causing more conflict themselves.
That my friend, is why I teach and created this entire PeaceWalker Community. That is why I put together the Private PeaceWalker Membership site. To provide the training and support for those who don't want to unknowingly become a thug. It's for people like you, who want to Live a Protector's Lifestyle. Become PeaceWalkers.
Get started right now with my free home study course! It's called Six Day Defense. You can get it below...
https://sixdaydefense.com/

Alright go and drink some Kombucha, do a few sit ups and take a walk! =)
Talk to you later!
Keep going,
~Craig