Here's the Real Thing Holding Most People Back! 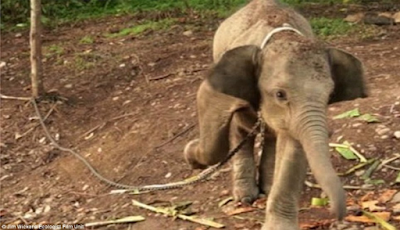 Funny how you make plans and then they change... Life just seems to be that way. Just like learning to defend yourself. You learn to make plans of action, only to have them fall apart in the moment of crisis, however, it's better to start with a plan and have to change it rather than not have a plan at all.

Today I am reminded of a story about not letting failed attempts thwart your future efforts.
The Elephant & Rope
Never let one failure from the past hold you back in the future:
A man was passing the elephants, he suddenly stopped, confused by the fact that these huge creatures were being held by only a small rope tied to their front leg. No chains, no cages. It was obvious that the elephants could, at anytime, break away from their bonds but for some reason, they did not.
He saw a trainer nearby and asked why these animals just stood there and made no attempt to get away. ‘Well,’ trainer said, ‘when they are very young and much smaller we use the same size rope to tie them and, at that age, it’s enough to hold them. As they grow up, they are conditioned to believe they cannot break away. They believe the rope can still hold them, so they never try to break free.’
The man was amazed. These animals could at any time break free from their bonds but because they believed they couldn’t, they were stuck right where they were.
~Author Unknown
Sharing the Journey
This community is filled with like minded people who are on this Protector's journey...
.
If you know someone who hasn't started their Protector Journey yet, forward them this link:
https://sixdaydefense.com/
It's the first step in the Journey to freedom and independence.
Then when the Private Membership Opens again, they may want to continue developing their PeaceWalker Skills.
In the meantime, pay it forward and help someone learn the independence, resilience and self reliance that's not often taught in our culture today!
Their journey begins with just six, ten minute lessons. The Six Day Defense Home Study Course, could change thier Life... Maybe even save it!
It's their introduction into a much larger world.
Keep going,
~Craig