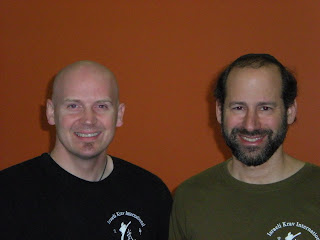 Moshe Katz and I at a recent seminar here in Grand Rapids, MI.

It is Sunday night, I am sitting here watching/listening to Robert Plant and the Strange Sensation DVD. It is a good one. I've always been a Zep fan and Roberts performance on this one is great! He and his band play one Zep tune and then one of his songs from the Mighty Rearranger. The Zep tunes are done in a very cool non-conventional way; keeping a great energy, yet a different twist on the old songs we know and love. A great DVD! If you like Zep and Plant pick it up!!

I was on Moshe Katz IKI site the other day reading his latest blog "Multi Cultural Krav Cuisine" and it really resonated with me. I liked it a lot, so I asked him if I could copy it and use it in my blog for all of you to read and hopefully enjoy as much as I did!?

I believe in a universal life value and I thought this reflected that sentiment as well.

Yesterday as I was driving to Brooklyn to visit my rabbi, I got off on the wrong exit. No worries, everything in life is a lesson. As I was driving up Avenue “U”, in the slow moving traffic, I looked at the physical and human landscape. Brooklyn is still is a city of immigrants. I saw many signs in Chinese and other Far East languages, I saw signs in Hebrew, and I saw signs in Russian. Some signs were even in English.

I observed the fascinating human landscape, people hustling and bustling, all trying to make a living, to make it in the American Promised Land. I saw them loading trucks, negotiating deals, rushing across busy streets, shouting in a variety of languages.

Some were dark skinned Jews from Iran or other parts of the Middle East. Some were burly Russian men; others were Chinese, Vietnamese and Korean. Arabs, Jews, Russians, Chinese, all different but all the same. I wondered, what would they create?

As I looked at them and tried to imagine their hopes and dreams, their struggles and disappointments, I tried to imagine what the next generation would look like, and think like. They would be some sort of mixture. They would speak English better, hold on to some traditions and drop others. Some might stay in the “Old Neighborhood”, while others would move away. What was clear is it would never be the same. Nothing remains the same.

I related all this to Krav Maga. I thought of the countries I have been to and the wonderful people I have met. Krav Maga is very Israeli but it is also multi-cultural. It draws from the Jewish experience, from the Israeli experience, from the Eastern martial arts of China and Japan, even from Russian martial arts. And in the uniquely American way, like American and Israeli culture, it is a blending of all these different cultures.

People from all over the world are learning Krav these days, and like any fine cuisine, each impacts the art, each one shapes it in some way, adding a little according to taste, adding a little local flavor. And just as each one adds something, each one learns something unique. Each learns a little about the soul of another people, about their history and their struggles. Just like that busy street in Brooklyn we are all in this together, we may look different, speak different languages but we are still on the same street, loading those trucks, trying to make a sale, keeping our heads above water, surviving and hoping to pass on something of value to the next generation.