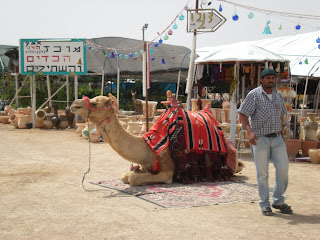 Roadside Arab merchant and camel near the Dead Sea.

My computer battery is running low and I am very tired (it's midnight here!) so I will try to keep this short!

A great day!! Some cool things happened and some not so cool things as well...nothing big, but ironic. Our day started off at 7am when we all got up to look in the fridge and find that most of the groceries that we bought the night before were stolen by one of the other people in the neighboring room. The kitchen is shared between three rooms so there is some risk of misunderstanding, inconvienence and of course theft. I didn't really put anything in the fridge that I couldn't live w/o, so it wasn't any real big deal for any of us (Fred and Tim as well), but it did provide some entertainment for us. We taddled to the folks who run the place and they were very nice about everything and come to find out the person who allegidally took the food was a friend of the son of the owners...so, a phone call later and it was curtains for that kid!

After we finished breakfast (which was fantastic btw!) we started walking to our bus station to get to training. Many of the bus stops had young military men and women carring M-16 rifles ready to rock! The stop we went by that was the most interesting had, I think, four people strapped w/sub machine guns to them. One older gray beaded man complete with yamaka (spelling error I'm sure!) and prayer shawl strapping a uzi to his back. Standing next to him were two younger men dressed in t-shirts and sunglasses w/tricked out M-16's and lastly a young military gent packing heat as well. An interesting site...one that most American's (including myself) aren't accustomed to! I wanted to get a picture so bad, but it seemed inapproperate!

So we find the bus station that we think we should be at and are waiting for our bus to arrive. We wait and wait and good ole' #174 never shows up dispite #28 returning again and again to our bus stop (literally 10x min!). Finally one of the bus drivers tell us that we are standing at the wrong bus stop and directs us to the right one, which btw, is very funny because the owner of the B&B directed us to that one only we couldn't understand her, but in hind sight she was trying to help us but she had broken English so we weren't getting what she was trying say. Oh well, we'll know for tomorrow.

Went to the Dead Sea as well today. Very cool! The salt deposits and rocks by the shore were very cool, so I brought some homes. We could see the boarder of Jordan on the other side of the Sea. We also worked out for a short while we were there, it was cool (well, hot really!).

After seeing the Dead Sea we trained some more...until 10pm that night! It was nice, but tiring!

Today we trained all day (today) about 8hrs total (6hrs-ish of training). We worked on the typical Krav Maga arsonel (so we'll be working on some new stuff in class).

Tomorrow we are off to Old Jerluseum! Should be a blast.

Well, I'm noddin' off again so I'm going to let you go.

Talk to everyone soon!