Training in Israel... The Journey Out 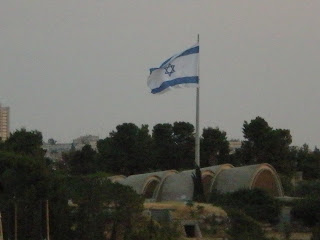 This is the view from my porch of the B&B I am staying at. Ammunition Hill - Jeruselum , Israel.


We're going to switch gears a little here folks. I'm going into travel writer mode for a spell while I'm here in Israel training. I hope you can just sit back and enjoy the ride along with me!

It is about 7:30pm Israeli time, so about 2:40am in Michigan. I am sitting here in my bunk bed at the B&B I am staying at here in Israel http://www.bnb.co.il/house57/ . It is a really cool place with a wonderful couple, Dan & Ilana Tamir who own it. If you are in Israel I would highly recommend staying there. Very reasonable cost, clean and near many of the historical sites! The only thing I don't like about it is that has European style shower aka rather small. I don't really mind it, but I am a slob and so I get water everywhere (sorry about the mess guys).

You'll have to excuse me because I am a bit jet lagged from my 22hr. flight, 9 hour layover and 8 more hours in the airport trying to connect with Tim one of the other IKI instructors out of Arizona. So if I zonk out for a second (like I just did!) and dooooooooooooooo that type of thing you'll know why!

So this flight plan was a long one and it ended up being about 38hrs in an airport or on a plane! :-(

So I'm on the Polish Aire flight 4 flying from Chacago to Warsaw Poland and I buy a snack that wasn't on the menu. The flight attendant gives me some change and has to go back to get my the rest. When she gets back she hands me a 5 dollar bill, everythings fine right?! Not really. This bill feels weird, it looks weird, it even smells weird. I look at it a little closer and it is the old style bill in mint condition... drum roll here... the date says 1950! It's true. I think it's counterfeit. So I put it in my money belt and will be taking it to the bank when I get back to the states to see what's what! If it IS counterfeit (which I believe it to be) I wonder if the airline knew it was handing out funny money? Who knows, maybe some Russian Mob connections!? You'll have to stay tuned later to see if that bill is real or not!

I have a 9 hour layover in Warsaw, so I figure I'd take advantage of it and go paint the town red. Much to my dissaponnet I am too wiped out from the flight and just drooled as I fell into a disoriented zombie-like coma until I had to catch my next flight to Tel Aviv.

I arrive in Tel Aviv at 3:30am...yes ladies and gents that is right 3:30am after an 9 hour flight. Tim and I decided to hook up at the airport. He was flying in from Arizona and I was coming from Michigan. So I see his flight comes in at 9:25 am... yea, 6 hours, but not the end of the world. After I get off the plane, get through the "interview" question about why are you coming to Israel, how long you're staying etc. then get through customs and grab a bit to eat the timeframe would probably be just fine. It would give me time to get on my computer to check e-mail, facebook, blah, blah, blah. We'll it was getting near 8am and I see on the board that the flight is delayed so now they're saying that it was going to be 10:50am. So I wait... 10:50 no Tim. 11am no Tim. 11:30 no Tim. 11:45 no Tim 12:15 no Tim. I ask the attendant if everyone got off the plane and he assured me that everyone has departed the plane! Uh oh! Tim and I were going to ride together to the B&B.

Earlier I tried using my computer at the airport and it needs a adapter, which I have, yet it still isn't working just right and keeps shutting down. I was able to briefly look at my e-mail to see that time messaged me from his Blackberry saying that he and Moshe were worried because I wasn't there yet and he (Tim) waited 2 hours for me before grabbing the shuttle to the B&B without me! WOW! Uh-oh (again!). Shit!!! The computer crashed just before I sent them both an e-mail that I was alright and would call them. I didn't bring my cell phone so I had to use a pay phone which turned out to be a disaster. No ange for the phone, weird country code that I didn't have, so I couldn't dial out, dailed the number and got some young kid. Walked for over a half an hour for another phone only to turn my happy butt around to use the same one I tried in the first place. All for nothing... I never did get that darn phone to work.

After my failed attempts at the phone call I finally just said screw it I'm going to take the shuttle. I jump on it and the guy says five minutes until we leave... 5 min, 15 min, 20 min, a half an hour... an hour... FINALLY a little after an hour the driver has enough people on board the van to make his rounds from the airport in Tel Aviv to the city of Jerulsum. About 45 minutes later I was meeting Tim, Fred and Stephan for the first time!