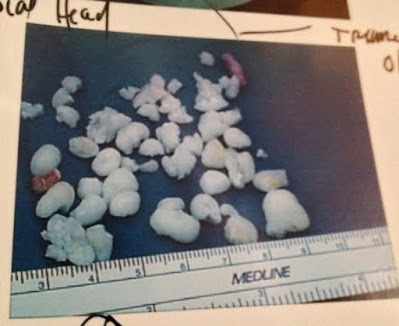 A few years back I was having trouble bending my arm. I was in a fair amount of pain for several years.

It got to the point where I could only move my arm a few degrees either way. Even after surgery, my arm doesn't come close to fully straightening out.
Take a look at the picture and you can see what the doc took out of my elbow joint.
What is all of that stuff and how did it get in my arm?!
And a better question is how do YOU avoid it from happening to you!
The picture shows bone chips that my body calcified over to protect itself. All of those chips had accumulated in my elbow joint over the years until I could no longer bend my elbow. It was almost completely frozen!
I tried everything before agreeing to surgery in 2015.
As you can see, there was a lot of debris in there. Hard to believe all that stuff was stuck in my elbow joint... yet there it is! No getting around the fact that surgery was necessary if I was ever going to bend my arm somewhat normally again.
Had I known that there was so much in there, I'd have my doc give me the 'rubble' so I could make it into a necklace or rattle or something! =)
How You Can Prevent That From Happening to You!
I could start this by w/a shameless, "Get on my Over Forty 10x Program to find out" plug! =D
But I won't (...Just Yet anyway...=)
But really, how did this happen and how can you avoid having it happen to you?!
This happened over decades of hard training, not tapping out from armbars, smashing things and countless elbow hyper extensions.
Arthritis set in due to all of the damage to the joint and just made things worse!
Bone chips, spurs, adhesions, swelling, all made for a rough ride for several years.
How can you avoid this!?
Yes, yes...Learn how to not get into armbars and learn how to get out of 'em too.
But in order to do that you have to learn... and train, so don't be a knucklehead like me and tap out! Soon and often!
Yea, sure I probably won a few matches because I refused to tap out in order to get out of the lock in order to escape.... But was it worth it?!
You ask the 50 year old Craig and I'll tell you "Nah!"  It wasn't!
I didn't know it then though. Even when I'd nurse an injured arm for several weeks. The pain would eventually subside, I'd heal and go back at it...Not really seriously considering the consequences later...
But at some point later comes to haunt you!
And here we are!
It took a fair amount of rehab to get my arm to function again... there are still a lot of things my arm can't do, but I'm lucky! Good thing for modern medicine!
I still do exercises everyday to maintain mobility of my joints.
Frequency, Duration & Intensity
Yes, yes, I needn't remind you that this is ANOTHER injury that helped inspire the Over Forty 10x Program I put together to hopefully help you prevent an injury like this (if it's not already to late)!
In the full program I talk about these three important training concepts:
Frequency
Duration
Intensity
As you get a little older, if you want to keep going in your training it's better to...
INCREASE the Frequency of your workouts and training sessions, while DECREASING the duration and intensity of them.
It's better to have shorter, less intense workouts / trainings more often than, throttling through less, high intense ones.
What about HIIT training?!
For those who don't know what HIIT training is, it stands for:
High
Intensity
Interval
Training
For the record, there's nothing wrong with it, as long as you do it sanely! I still ramp things up once in a while, but the majority of my training is less intense and fairly short.... I just do it every day.
Want More!?
Check out my free home study course. Click the link below:
https://sixdaydefense.com/
Keep going,
~Craig