I Barely Made It Back 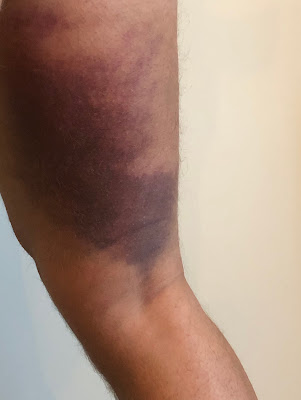 About four years ago on a warm summer Saturday Morning, I was running my typical 3 to 5 mile route back through the hills and trails of Richmond Park.

(I typically put in a little workout before teaching down at our local Krav Academy.)
I was keeping a pretty good pace for an 'old guy' when I felt a *ping* in my right leg. It happened when I was almost at the bottom of the huge hill back in the trails about a mile and a half or so into my run.  It was enough to stop me in my tracks.
When I felt it, I 'pulled over', massaged my leg, stretched a little and thought I'd just 'run though it' like I typically always did...
Only this time it was a little different...
I didn't even get 10 yards and I had to stop again.
I figured I'd 'rinse and repeat' the stop, massage, stretch method.
Then off I went again...
This time I maybe got 15 yards, but the pain wasn't going away...
But that didn't dissuade my resolve. I did the 'Rinse, Repeat, Run' approach several times until finally giving up ship about a mile and a half from the academy.
I Barely Made It Back...
I gimped my way back to the academy just in time to teach my Krav Classes.
I did manage to survive teaching that day... When the evening came around, my legs were cramping up so bad I was practically breaking out in a cold sweat.
Something Weird After a Shower
About a week or so later as I 'patiently' waited to get checked out by my doctor, I was getting out of the shower and out of the corner of my eye, I saw something strange in the mirror...
The back of my leg had a spot or something on it, but I couldn't really tell, so I grabbed my hand mirror.
After doing some positional yoga, I aligned my naked rear end in a way where I could clearly see what was on my leg...
A HUGE bruise... The very bruise you see on that pic on top of this email. It took another week or so until the bruise on my OTHER leg came out as well.
Yes sir-ree Bob... I tore BOTH of my hamstrings!
Now I Have to be Honest Here...
I know t's a bit of a ego thing here, but I was a bit relived that there was something I could point to and say, "see! I'm not being a wimp!" =)
After getting checked out, it appeared that I tore the hamstrings on both of my legs. They weren't completely detached, but torn enough to have some serious bruising.
All from doing what I normally always done!
I wasn't doing anything different that I hadn't for years... Decades even, but...
My body was changing!
At the time I was probably 47 or 48.
Now, because I take care of myself by working out and good diet and nutrition, I was able to recover rather quickly...
However, I didn't want to risk another injury like this,
I knew if I wanted to sustain my training, I HAD to change what I was doing!
So I took the time and effort to reworked my entire workout, diet and fitness routine.
Here's what I did:
~ Re-imagine my stretching routine
~ Change up my diet and hydration
~ Instituted different types of strength training exercises
~ Recalibrated my mindset and focus
It took me some time, but the results were well worth it.
Since then, I've never felt better and have had less injuries in my training and life!
Want to Know the Step by Step Details of How I Do It?!
Check out my Over Forty 10x Program Here:
https://peacewalker.clickfunnels.com/overforty10x
Keep Going,
~Craig