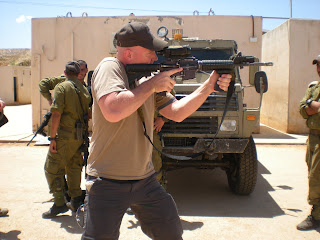 IDF Soldier lets me take a look at his M4 while on Israeli Army Base near Lebanon boarder - - - - Quite the busy day yesterday. We began with Elliot Chodoff giving us the the rundown of the Lebanese / Israeli conflict(s), past present and (possible) future. We stood just off the deserted road listening to Elliot give us the intimate details of the things most people only see on CNN. We could see the Pale UN boarder marker on the Israeli/Lebanese border and felt the wind from the IDF armored patrols as they sped by us in their converted Hummers. Looking up on the hill above us was a Hezbollah outpost close enough to almost touch. It's one thing watching this on the news, it's another thing seeing it up close. The feeling was rather eerie. Once again I found myself in this strange sublime place between worlds; the West and the Middle East. Two very different places. After being properly briefed by Elliot, we were taken to two IDF Military Bases that were on the boarder between the two warring countries. Both of the bases were operated and commanded by young Israeli's. The women (mostly between the ages of 18 and 21 yrs old) were running the command center and young men were at the other base who were responsible for maintaining the sometimes violent boarder. As we were visiting the fortified machine gun and surveillance bunkers we witnessed a small unit of the soldiers respond to and investigate a possible security threat that occurred just below our position. We watched intently as the soldiers got out of their Hummer and surveyed the area where the disturbance was reported. The small three man team fanned out in formation and secured the area. Luckily it was nothing to be alarmed about, however the Major who was commanding the outpost said that there have been ambushes and Car bombs in the past and it was always a possibility... Once again I was reminded that we're not in Kansas anymore Toto! After we got out of the bunkers, we had lunch with the soldiers in their mess hall. The food complete with ample supplies of hummus (of course) was really good! Once we finished eating, The Conquerors International Strength Team's Mike Benson and Greg Molchan put on a brief feats of strength show and voiced support toward the troops and Israel. After the show we all talked and got pictures of everyone. To our surprise the troops let us try out their M4's... Well, we didn't get to shoot them, but we did get to handle them as youncan see from the pictures. They gave Mike and I some pointers on proper positioning while in the standing position. The troops seemed to be moved and gave us embroidered hats from their unit. Now let me explain something about the hats; these weren't just any hats, these hats were the soldiers very own hats, the one's that they were wearing themselves that they gave as appreciation for us coming out and showing them our support. As we left, the Maj. Of their base told us how much it meant to the soldiers; it really boosted their morale regarding their purpose and having our support. It helped them to feel less alone out there in the eyes of the world. Each of us were moved. - - Stay tuned! More to come! - - Stay safe, -Craig