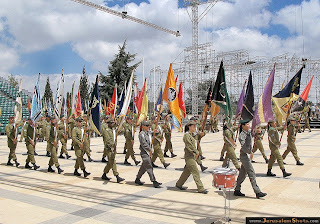 Mount Herzl has served as Israel's national cemetery since 1951, following a government decision to establish a cemetery for Israeli leaders and fallen soldiers. Mt. Herzl is the burial place of three of  Israel's prime ministers:  Levi Eshkol, Golda Meir and Yitzhak Rabin (who is buried beside his wife Leah). Israeli presidents are also buried on Mt. Herzl, as are other prominent Jewish and Zionist leaders. Mt. Herzl is the venue for many commemorative events and national celebrations.

Although the cemetery is filled with countless hero's of Israel's past I want to talk about one very alive young man named Don (Name changed to protect his identity). I had the pleasure to meet and talk to Don, a young man Born in the United States who decided to become a Israeli citizen and join the Israeli army. He is currently completing his training in one of the toughest special forces /counter terrorist divisions in the world: Israeli Army's Duvdevan. He took time from his tough training schedule to talk to us about his life, why he decided to join the Israeli Army and what his life was like here. He filled us in on the history and realities of military life. He told us what it was like to live here from the States and live in the army. He loves what he is doing and although it is difficult he wouldn't have it any other way.

Stay safe out there!