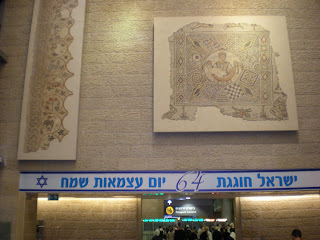 
Touched down in Tel Aviv this morning about 12:45 am (Israeli Time), up at 7am for a day of touring and talking with Israeli Defense Force Maj. Elliot Chodoff. What a great day! A Huge Thanks to The Conquerors for having me accompany them on their tour. The day began with a tour of Caesarea, built by King Herod of the Roman Period. The extensive seaside ruins include structures from the Roman, Byzantine, and Crusader time periods. We explored an amphitheater, Crusader harbor, 12th Century ramparts and Recently uncovered hippodrome. Amazing! After the tour we ate an incredible kosher lunch at an Italian restaurant at the site. Our next stop took us to a 2nd Century Jewish cave burial ground. This site was first discovered in the 1930's and continues to be excavated uncovering more sarcophagi. Another interesting thing I find with some of these site in countries as old as Israel, is that they are often found in the middle of everyday life like in this case, a regular neighborhood. After getting a better look at the Jezreel Valley we then toured and had a wonderful homemade dinner at Ofer and Atcilit's Moshav, Nahalal. www.nahalal.net Nahalal is a small agricultural town (Moshav). It was founded in 1921 on land that was purchased by the Jewish National Fund. It's founders we're Eastern European Jews who wished to create a communal cooperative community enabling each settler personal fulfillment in his home, farm And family life. The first settlers initially worked in Kibbutz but felt that keeping their individual family structures were also important, so they broke away and formed Israel's first and only Moshav. The hospitality was simply amazing as was the freshly grown and prepared vegetarian dinner! Throughout the day Elliot shared insights and stories of his experiences fighting Israel's war against terrorism in the Second Lebanon War, Gaza Strip and other military operations. It is hearing stories like Elliot's and (once again) experiencing Israel directly that gives me a much deeper understanding of what Krav Maga is about. It has more to do with attitude than it does with technique. Tomorrow we are off to the Sea of Galilee and the Golan Heights! Talk to you all later. Best, -Craig