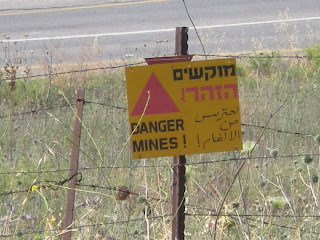 Here we are, day two of Israel. The group got kicked out of Capernaim... Shorts not allowed! St. Peter won't you let me in!? =) Since that planned Went FUBAR we decided to continue exploring the Golan Heights of Northern Israel by the Lebonan / border. Being careful to avoid the mine fields left behind by the Syrian army (With help from the Russians) we viewed some of the old and new dividing lines between these often warring countries. Major Elliot Chodoff explained some of the critical battles. He took us step by step through the strategy, tactics, and outcomes of these conflicts, which shaped the State of Israel. It was difficult to conceive all of the fighting, terror and death that was witnessed here while we toured with friends on such a beautiful day. The birds were chirping, the wind blowing, the sky was blue, the weather perfect and in spite of all of this, the tales of what unfolded in this place lead me to think and attempt to put my mind around the gravity of what was sacrificed and fought for over the years. - After we came down from our discussions of the various battles of Israel's not so distant past, we loaded up in some off road Jeeps for some four wheeling in the Golan Heights. I rode shotgun next to Joseph who was driving his Baja style Jeep. Joseph reminded me of an Israeli version of a surfer. A Cool dude! He was a very happy guy who has a wife who is expecting their fourth kid, they live on a kibbutz and although being 45 years old, he still volunteers in the IDF. As a matter of fact, he was telling us that he was just doing some counter terrorism training this past weekend. They were practicing extracting people from barracks in the kibbutz. He was very excited about still serving in the IDF. We enjoyed a nice conversation and I appreciated his attitude toward life! - After a half day of off roading, we stopped back in the middle of nowhere, walked back through the woods and had a great homemade picnic inside of an ancient Arab wheat mill. The food which was made by Joseph's wife, was excellent and the location was incredible as well! - We explored some other sites and saw firsthand some of the cities in Northern Israel that are still directly threatened by Lebonan terrorist organizations. It is sublime to consider the threat that these people live under while they carry on their day to day lives. - After going back to the hotel to freshen up the group talked about Middle Eastern Politics, Jewish tradition, Biblical translation, and pretty much anything else under the sun, while we ate at this restaurant on the Sea of Galilee. This place called Decks was out of this world. It is located on an open air deck (of course) and served course after course of the most fabulous food yet! Great conversation, food and ambiance! The perfect end to a perfect day! - And now it is time for me to hit the hay! Tomorrow it's off with Elliot to an IDF Base near the Lebonese border to meet some of the troops and view the facility. - Good night all. Stay safe, -Craig