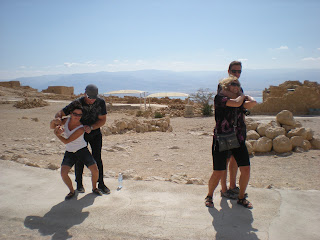 We got an early start to drive to Israel's legendary Masada. Once there we prepared to hike up the side of the rock plateau to see the ancient structures and hear the legend of how a few hundred brave Jewish Rebels went head to head against the strongest empire of the day, Rome. The ancient palace and fortification on top of the natural rock plateau were originally built by King Herod in the Southern District of Israel on the eastern edge of the Judaean Desert overlooking the Dead Sea. In the first century CE during the final push of the First Jewish–Roman War, the Siege of Masada by troops of the Roman Empire led to the mass suicide of the Sicarii rebels. Until recently new IDF soldiers were sworn in on top of Masada by torch light. To put things into an American perspective, Masada is to the Israeli's, what the Alamo is to Texans. of the

The sun was hot, but not unbearable. Once in the shadow of the rock face it was actually pretty nice. The climb was a nice workout that felt good after being in the tour van for so long this week. Elliott stopped our accent a few times to fill us in on how the Romans would lay siege on to the Jewish Rebels of Masada. He showed us the ruins of the 7 foot siege wall, the outpost and command center that the Roman soldiers built around the entire rock plateau. Elliott explained how it only took the soldiers about one week to do this. It was amazing that their was still remnants of the structures left after two thousand years of erosion. Elliott went on to explain that the command building was positioned in such a way that the commander could actually talk to the people on top of Masada. I'm sure what was said between them was less than friendly.

We continued to climb the steep stairs until we finally reached the summit. Looking down we could see the remains of the ramp that the Roman soldiers built that went from the ground below all the way up to the top of the plateau. The Romans used Jewish slaves to build the ramp to stop the rebels from attempting to harm the workers as they built the ramp. You can read about the rest of the story by clicking here. 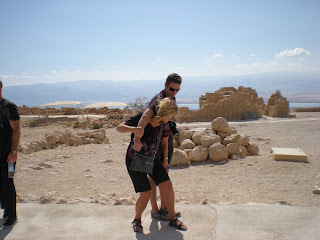 Vanda escapes her husband James hold on her Krav style!

As an intermission between Elliott's commentary, Mike Benson and I rounded the crew up for some Krav Maga training. I had the honor of introducing six Americans to authentic Israeli Krav Maga on the top of legendary Masada! Not a bad day at all! How many people can say that their first Krav Maga lesson was on Masada in Israel!?


One of the main things that I wanted to get across regarding Krav Maga went beyond technique. It was about the attitude, so what better place to get that point across than on top of Masada!? That's the true essence of Krav Maga! Those people who stood up against the Roman's chose between really bad and and a whole lot worse. They believed it was better to chose to die in a manner that they controlled, a more dignified way than succumb to the fate that they would have at the hands of the Roman Army. A tough decision would be an understatement.